I’m excited to read some new work at this event organized by Pandora’s Collective – responding to work by artist Olga Campbell.  Other writers reading include Bonnie Nish, Leanne Boschman, Alana Clohessy, and Stephan Karr.  There’s also an open mic component, so come read some of your own work too. 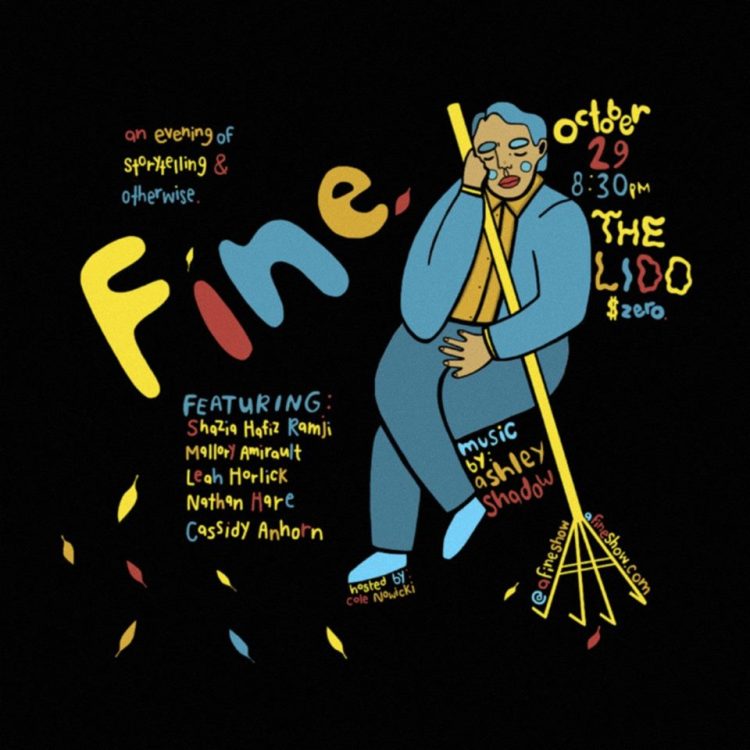 On October 29th, a mix of five talented writers and comedians will get onto a stage and tell stories that, if you like, you can come and listen to. (It promises to be a severely autumnal event.)

and music by Ashley Shadow
https://ashleyshadow.bandcamp.com/
Hosted by Cole Nowicki

Congrats to Mr. Redhill – I was kind of rooting for Eden Robinson for Son of a Trickster, but I’ll give his a read now too!

Daniel’s new book, Everything is Awful and You’re a Terrible Person, is coming out from Arsenal Pulp Press! I’ve raved about him before.  If you’ve read his first book, Davie Street Translations, you know why you’ll want to be here for this.  If you haven’t, find it for purchase at your local bookstore or direct from Talonbooks here.

“Hi friends and potential new friends, my book comes out soon. The launch will be at a donut shop and booze will be available along with the book.

I will probably read for a very short time but mostly would like to eat donuts and drink wine.

Here is some actual info on the book including nice things people have said about it:
http://www.arsenalpulp.com/bookinfo.php?index=458

Pulp Fiction will be at the launch to sell books because they are cuties.

The space is accesible, no stair ways and is on street level. 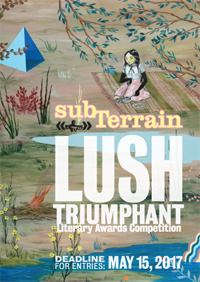 Details are here.  Get ‘er done!

This will be a reading not to miss…an immense amount of talent in one place.  I’ve posted about Elee several times, but Fred Wah, Evelyn Lau and Julie Emerson are all incredible.

Please join us for an intimate reading and discussion with an all-star lineup of local poets: Evelyn Lau, Fred Wah, Elee Kraljii Gardiner, and Julie Emerson will read together for the first time – ever – at Pulpfiction Books on Tuesday, November 1st!

We’d like to acknowledge that this event takes place on the unceded territories of the Squamish, Musqueem and Tsleil-waututh First Nations.

About these (amazing) poets:
EVELYN LAU was born and raised in Vancouver. She published her memoir, Runaway: Diary of a Street Kid, when she was 18. Evelyn’s poetry, prose and essays have been widely published, including the award-winning poetry title Living Under Plastic. She was Vancouver’s poet laureate from 2011-2014. Her latest book, Tumour, digs up her deepest fears to unearth the universal hope we all have of a life that matters.

FRED WAH was born in Swift Current, Saskatchewan, in 1939 and grew up in the West Kootenay region of British Columbia. After graduate work with Robert Creeley and Charles Olson, he returned to the Kootenays in the late 1960s, founding the writing program at David Thompson University Centre (DTUC). A pioneer of online publishing, Wah has mentored a generation of some of the most exciting new voices in poetry today.

Wah is recipient of numerous awards for his writing inlcuding the Dorothy Livesay Poetry Prize and the Governor General’s Award. Wah was appointed to the Order of Canada in 2012, and served as Canada’s Parliamentary Poet Laureate from 2011 to 2013.

JULIE EMERSON is a multimedia artist and writer from Vancouver, and the author of The Herons of Stanley Park (2013, with photographer Martin Passchler) and A Hundred Days: A Botanical Novel (2012). Her work has been shown at galleries in the Lower Mainland and Mayne Island, BC. Her latest book, Twenty Seven Stings, is a suite of seventeen poems inspired by the cultural histories and military strategies that have led us into wars throughout history, from sixth century BCE China to Alexander the Great to contemporary American drone warfare.

ELEE KRALJII GARDINER is the author of the book of poems serpentine loop (Anvil Press, 2016) and the co-editor with John Asfour of V6A: Writing from Vancouver’s Downtown Eastside (Arsenal Pulp Press, 2012). Elee founded Thursdays Writing Collective, a non-profit organization of more than 150 writers in Vancouver and she is the editor and publisher of its eight anthologies. She is originally from Boston and is a dual US/Canadian citizen.www.eleekg.com

Real Vancouver Writers’ Series is falling for these amazing readers as part of the Little Mountain Lit Shop.

Tickets atr $5 or PWYC (no one turned away for lack of funds). 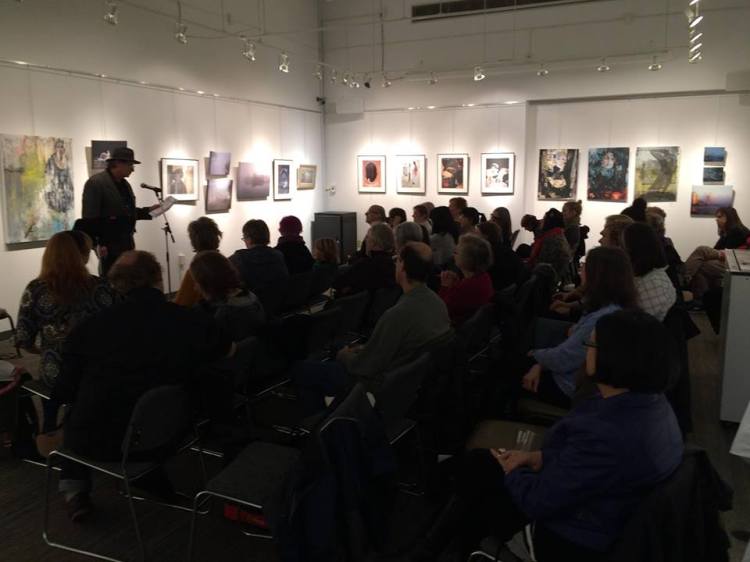 This is gonna be great!

Looking forward to reading alongside veterans and talented folks like Kevin Spenst and Timothy Shay at this event.  There’s a link below to see the art that the poets will be responding to as well.  See you there.

There will be an open mic time when members of the audience will be given an opportunity to write and then read poems they have written that relate to the exhibition.

Presented by the Sidney and Gertrude Zack Gallery in collaboration with Pandora’s Collective and the Isaac Waldman Jewish Public Library. Made possible by the Yosef Wosk Poetry Initiative Grant

My paintings are informed by the different identities cities take on over a period of time.
I am interested in how different societies transform and change city spaces over the course of the centuries. My work examines the relationships between people and cities by responding to constant change, reconstruction and restoration in the urban landscape.
Decay, erasure, covering, revealing and rebuilding take place at the same time and are part of my painting practice. I see my process of covering as a metaphor of forgetting and suppressing the past. The process of revealing and sanding the surface down alludes to a process of remembering.

Elee Kraljii Gardiner’s first book of poems promises to be a great read.  Looking forward to picking up my copy in the coming week and biting into this… 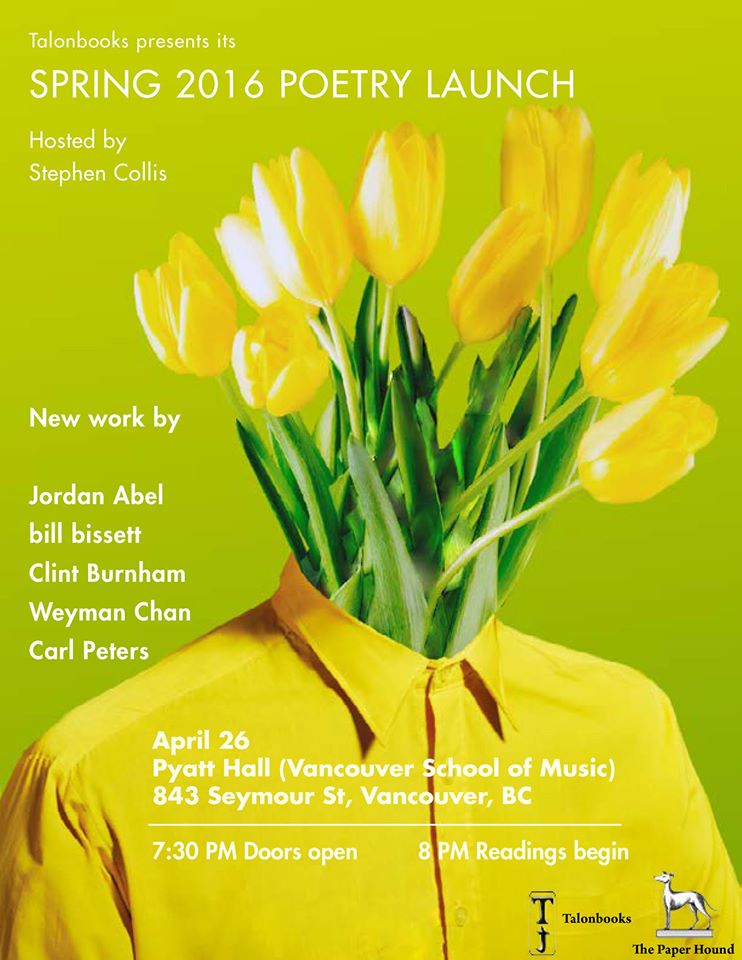 The poets will read from their brand-new books. Drinks and snacks will be served. Books will be available!

Doors open at 7:30 PM. Readings start at 8:00 with Carl Peters, Clint Burnham, and Jordan Abel, followed by a break, and then Weyman Chan and bill bissett. And Stephen Collis will host!

Free. All are welcome!